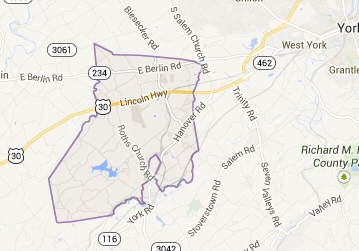 Jackson Township, a European settlement, dates back to the mid-1700's when German farmers, fleeing the turmoil of their homeland, immigrated to Pennsylvania’s Codorus Valley.   These industrious Germans immediately began farming the rich soils of the area.   Farming provided the basis for the initial growth and continues to be an important factor in the local economy.   In addition to farming, the iron ore industry was very successful by 1763.   By 1840 thousands of tons of ore were shipped annually from Jackson Township.   The early development of the iron industry made possible the construction of the Monocacy Road around 1739.   This road roughly followed a pre-existing Indian path known as the Monocacy Trail which ran through the forests of southern Pennsylvania.   The village of Nashville was developed primarily because of the commerce associated with this road now known as Route 116.

Jackson Township was originally part of the Paradise Township (established in 1747) which was laid out by surveyor Joseph Pidgeon.    In 1853, a group of residents petitioned the York County Court of Quarter Sessions to divide the township of Paradise.   After review of the request the Commission consisting of George Eichelberger, Fredrick Sultzbach and John Brillinger found that a division was “proper and necessary” and proceeded to survey a new township dividing line between the townships.   November 1853, Judge Robert J. Fisher decreed that the new Township shall be called Jackson Township.    Like many municipalities which formed at this time, Jackson Township was named for Andrew Jackson, hero of the Battle of New Orleans and seventh president of the United States.

In 1855 the Court appointed the following officers to govern Jackson Township until the next regular election:

A ridge line extending northeast to southwest known as the Pigeon Hills was and still is a dominating natural feature in Jackson Township.    The ridge is covered by stands of mature oak,   hickory and chestnut trees which were the source for building materials, firewood and charcoal, which was a very important commodity in the iron industry.

The smelting of iron ore also required limestone.   Fortunately a geologic formation known as the Kinzer Deposit lies under most of the Township and provides a source of high quality limestone.   The quarry that began in Thomasville and is still in operation today provided the much needed material.   It produced/produces white limestone that is used for paint pigments, asphalt shingles, linoleum, vinyl spackling and other items.   During the later part of the 1800's the York-Gettysburg Turnpike (now known as Route 30) was used extensively for freight transportation.   This turnpike passed through Thomasville and was a major contributor to its growth.   Today Route 30 is a major thoroughfare from the east coast to the west coast of the United States.

In 1939 Oscar Hostetter established a private runway along Route 30 just west of Thomasville to service his private aircraft as well as providing a landing spot for the single engine planes used to carry air mail.   Originally a grass strip surrounded by corn and potato fields, the 4,200 foot runway was paved in 1955 to provide a modern landing surface for all but the largest of aircraft.   In the 1960's the runway served double duty as the US30 Dragway, a nationally recognized drag racing facility.   Known officially as the York Airport, pilots still refer to it as the Thomasville Airport. The airport is currently owned by York Building Products and is the largest privately owned, paved runway in York County    It is home to a medical emergency helicopter service and many private air craft used by individuals and businesses.   The airport is also home to the oldest Civil Air Patrol squadron in the country.   The patrol, which uses privately owned airplanes, provides emergency and search and rescue services to York County and surrounding areas.

The construction of Jackson Township’s first sewer line in 1998 , and the completion of a major collection system and treatment plant expansion in 2009 has initiated a burst of growth.   This was accompanied by a major extension of public water service by York Water Company as well. When the current residential subdivisions under development are fully constructed, it is anticipated that the Township’s residential dwelling unit count will have increased by approximately 50% in just five years.

This growth has resulted in major expansion of the public school facilities.   Spring Grove Area School District has an extensive school campus in Jackson Township including an elementary, intermediate, middle, recently renovated middle and new high school as well as new athletic facilities and stadium.

With increasing demand for recreational options, the Township became a partner with the Spring Grove Regional Parks and Recreation Center, assisted in the construction of a leg of the York-Hanover Trolley Trail and constructed their first neighborhood park between 2005 and 2013.

The Windy Hill Senior Center recently moved to the former Spring Grove Area School District's former Middle School facility where it occupies approximately 13,000 square feet of space in this building.  They serve the senior citizen population of Jackson, North Codorus, Paradise, Heidelberg, West Manheim and West Manchester Townshps as well as the Boroughs of Spring Grove, Jefferson and New Salem for over 25 years.  A variety of services and programs are made available to their current membership of over 500 individuals ages 50 years and older.  It offers daily social, educational and fitness programs and serves a hot nutritious meal at noon.  www.windyhillseniorcenter.org.

As indicated by this brief history, you can see that Jackson Township has been and continues to be on the leading edge of the progressive and responsible development of York County, Pennsylvania.